The number of participants of a platform impacts the value they can perceive from the platform. This phenomenon goes by the name of network effects and dates back to the early 20th century (to the telephone’s early days). Because they’re specific to platform businesses (as compared to traditional, pipeline businesses), network effects are fundamental to get right to build and grow a successful platform business.

Since we’ve been talking about platform businesses with two (or more) groups of participants, we can classify network effects across two dimensions:

A direct network effect happens purely within one group of participants. For instance, when having more producers makes the platform more valuable for each producer, we have a direct positive network effect.

This post mirrors part of the book I’ve written on product strategy for platform businesses, based off the workshops I ran in 2020 at Productized and JAM, which you can order from Amazon.

All combinations of network effects can (and usually do) exist on the same platform. An increasing number of consumers in a platform can be

Since increased value attracts more participants, we see that a platform has an underlying network effect engine. To keep that engine well-oiled and working to our advantage, we want to:

When we have cross-side network effects, this means producer growth stimulates consumer growth and vice versa. Combining these cross-side network effects can create a flywheel effect. The feedback loop gains momentum, and the same amount of effort to add either value or participants increasingly pays off. We can also think of it the other way around: we need less and less added effort for the same pay-off. At an ideal extreme, the platform becomes auto-catalytic.

This shows that we need to nurture positive network effects. Keep the flywheel well-oiled so that, after you’re able to put it in motion, it will remain so with less and less effort. (In a future post we’ll discuss the problem of starting this wheel in motion.)

In linear businesses, more is almost always good, as it brings economies of scale. Platform businesses are different: their networked structure brings upon network effects. Because some can be negative, it’s healthy to do what we’d only do on an exception in a linear business: refuse business. Refusing business doesn’t sound good, so we got a more socially acceptable word for it: curation.

Curation mechanisms to deal with direct negative network effects revolve around preventing or limiting access to the platform (or to the service it provides).

We can use a mixture of that and better filtering/matching criteria for indirect negative network effects. For example, if having too many producers is detrimental to each consumer’s experience, we don’t need to

We just need to put less supply from producers in front of each customer. Let us remember the three categories of gaps in your core job you can expect to have for grab:

Curation operates on a delicate tension between #1 (stronger pull) and #2 (better matching).

The shopping centre doesn’t play a direct role in a purchase — the shop sells directly to the shopper from their inventory. However, the shopping centre does provide the conditions (infrastructure, supporting services, co-location with complementary shops) to make that transaction more likely and efficient than without it.

The shopping centre provides value to shops and shoppers and stands to capture part of that value (at first to make up the upfront cost of providing the platform, and then to make a profit themselves).

And what about same-side network effects? The more other people go to the same shopping centre, the better it serves as a shopper’s “third place”. They can expect to bump into familiar faces, or propose it to friends for a get-together knowing that they are used to going there. For shop owners, being part of a shopping centre full of empty shops is also no good.

Most of these network effects become negative if they grow uncontrollably. E.g. If too many people go there, shoppers start facing problems:

The place’s popularity becomes a deterrent, driving valuable consumers away from the platform. “No one ever goes there, it’s always busy” And that’s not good for producers.

These negative network effects highlight the need for curation by the platform owner. You’ll recognise these mechanisms from your visits to the shopping centre — maybe you just never thought about them like this. Parking lot fees both moderate the time consumers spend at the shopping centre and curate the audience. Security guards, CCTV and theft alarms are there to deter visitors who might not only not buy but also subtract from the shops’ inventory.

But we also need to curate the producers — for instance, by controlling their distribution across categories and segments. What good is a shopping centre with four mobile phone shops and seven nail salons if it doesn’t have a single place to buy flowers or a newspaper? (Incidentally, or not, shop curation ends up also working as a shopper curation mechanism.)

Network effects in a nutshell

In the next post on platform businesses, we’ll discuss how to kickstart the flywheel of positive network effects.

This post mirrors part of the book I’ve written on product strategy for platform businesses, based off the workshops I ran in 2020 at Productized and JAM, which you can order from Amazon.

This post represents my individual professional opinion on this subject, not that of any company I work (or have worked) at/for on this subject area. 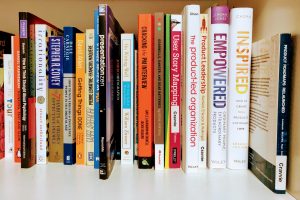